Report from the first workshop of the International Research Network – Runes, Monuments and Memorial Carvings:

Download the programme and all abstracts as pdf (revised version, 19 August 2011)

The workshop was a great success. Many of the Network”s members attended, and the workshop attracted new participants as well. The participants” contributions to the fruitful discussions and general good atmosphere are highly appreciated! During the process of planning and organizing this workshop we have received support, advice and practical help from several members of the Network, especially Lesley Abrams, Lilla Kópar, Henrik Williams and Marco Bianchi. We are also very grateful to the Nordisk Kulturfond, Letterstedtska Föreningen and the Kungl. Humanistiska Vetenskaps-Samfundet i Uppsala for their generous financial support and for the Insitutionen för Nordiska Språk of Uppsala Univsersity for their hospitality. 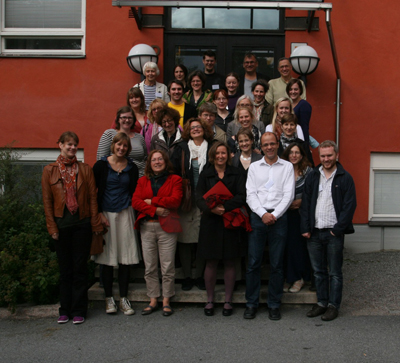 The participants of the workshop in Uppsala

Thirty people attended the workshop, of whom fifteen presented a paper and two were keynote speakers. Additionally one participant presented a project and another one gave a presentation about funding opportunities. The participants represented a variety of disciplines and research topics. They were divided quite evenly over the various career stages: 8 postgraduate students; 9 recently doctorated and/or post-doc holders; 8 more advanced scholars; 3 senior academics; and 2 non-academics. The various countries of residence were represented as follows: 13 from Scandinavian countries; 9 from the British Isles; 7 from Continental Europe; and 1 from the USA. We are pleased with this variation of participants, since it was an important goal of the workshop to bring together (young) academics from different backgrounds working on related stone monuments. In order for the members of the newly established Network to get to know each other, we arranged to have dinner together both evenings.

The two days of the workshop saw varied presentations that ranged from the results of inventories and analyses, to the introduction of new projects, to more theoretical discussion starters.

Both days were introduced by a keynote lecture. The first day, Lesley Abrams explored how stone sculpture reflects the interplay between the host culture and that of the settlers in the Viking Diaspora. She also wondered to what extent there was a shared culture and identity  between the Scandinavians in the homelands and abroad. Henrik Williams set the tone for the second day by reminding us of the importance of runic studies for uncovering Viking Age ideas and mentalities. He pointed out pitfalls and addressed various misconceptions about aspects of runestones and their inscriptions that can hinder their interpretation. He used the examples of fixed ideas regarding spelling conventions and various interpretations of vocabulary to argue for a fresh, open-minded and more holistic attitude towards the material.

The emphasis in the first session, themed “Production and Public”, was on how the circumstances of the production of the monuments reflect their function and how these can be reconstructed. Lilla Kópar kicked off this session by exploring the agencies involved in the steps in the production of various kinds of stone monuments across the British Isles, using an array of source material, from evidence on the monuments themselves to Old Irish legal documents. Laila Kitzler Åhfeldt approached the theme from a different angle. She has studied the mobility patterns of carvers of runestones and early Christian grave monuments in the province of Västergötland in Sweden as represented by their carving techniques. The regional variety in Norwegian stone crosses was presented to us by Iris Crouwers.

The first “Text and Images” session focused on the public in more detail. A recurrent theme was re-evaluating the content and possible meanings of certain words and phrases in runestone-inscriptions. Marco Bianchi demonstrated the possibilities and difficulties of reconstructing the model reader of a runestone. Maja Bäckvall presented her inventory of multiple-inscription runestones and pair stones and the complicating factors in this process.  The English translation of maerki as ”landmark” in the Samnordisk runtextdatabas was addressed by Magnus Källström, in an evaluation of what can be known about the meaning of this word on the basis its linguistic context and the specific features of the monuments that it denotes.

The second part of this session was dedicated to images and their share in the function of the monuments. A interpretation of the function of anthropomorphic images on Scandinavian stone monuments was offered by Michaela Helmbrecht. Martin Goldberg presented a survey of the images of the majestic riders on Pictisch stones.

The day ended with a presentation of the Academy Project”Runische Schriftlichkeit in den germanischen Sprachen – Runic writing in the Germanic languages (RuneS)” by Kerstin Kazzazi. This long-term project (2010-2025) deals with the runic script as a writing system within its historico-cultural context in a comprehensive way. More information:http://www.uni-goettingen.de/de/131662.html. This presentation was followed by an analysis of the Old English runic stone monuments by Gaby Waxenberger.

Due to illness, Zanette Tzigaridas Glørstad was unfortunately unable to attend and deliver her presentation about the excavation of the runestone at Hogganvik, Mandal, Vest-Agder. As a result, the first session of the second day, “Archaeological Context”, contained one, more elaborate joint presentation. Gordon Noble and Meggen Gondek presented the results of recent excavations of Pictish stones and a hillfort at Rhynie.

In the final session, on the theme of “Social Function”, the political events and cultural phenomena that played a role in the erection of stone monuments were discussed in more detail. Lisbeth Imer discussed why runestones were raised in certain places at a certain time in Denmark. Lydia Carstens raised the question of what a monument is and whether runestones fall under this denomination. Her argument that most runestones were initially meant for private remembrance sparked a lively discussion. Kristel Zilmer explored the influence of the individual on runestone-inscriptions by looking at the understudied varieties in these inscription.

General Discussion – The Use of Carved Stone Monuments

In the two general discussion sessions on the topic of the use of carved stone monuments, various themes that ran through the presentations were revisited. The great complexity in the function of the various kinds of Viking-Age and early-medieval monuments in Scandinavia and the British isles has been stressed throughout this workshop. Nevertheless, because of the shared material nature of carved stone monuments and apparent (mutual) influences in the (memorial) traditions and the appearance of the monuments, similar questions concerning provenance, production and perception are at the core of our research. The spatial, material and cultural context of a monument is a key to understand its functions.

The Future of the Network

In the final session of the workshop, the Network and its possible role in supporting such research were evaluated. This session was introduced by a presentation by Tineke Looijenga about the different kinds of EU funding that might be applicable to the Network.

The Anundshög runestone in Västerås

The two-day excursion, which 20 of the workshop participants joined on, started with a visit to the complex of large burial mounds, shipsettings and standing stones, among which the runestone Vs 13, at Anundshög. After this, we visited three iconic runestones and one church with (fragments of) early Christian grave monuments in the Rekarne area in the province of Södermanland. The runestones had been mentioned in various papers during the workshop, so the discussions continued at the monuments. We started off with the carvings at Ramsundberget (Sö 101) and Sö 106 which illustrated how families can be traced over multiple memorials. Outside Sundyby church we saw the lidslab from an early Christian grave monuments built into the wall (Sö 116) and inside the church we admired the very well-preserved original paint on Sö SB1963;149. The day ended with  the Göksten (Sö 327) before we travelled down to Vadstena where we spend the night.

We started the second day in Östergötland with the ruins of the crypt “Sverkerkapellet” at Alvastra where we saw the slabs of early christian grave monuments that were used under the pillars. Then we continued to the famous Röksten (Ög 136) and later on to the 12th-century Hov church that houses an elaborate collection of fragments of early Christian grave monuments which we studied.

Organizers of the Network